Our front garden used to be a tennis court, on which we built several large raised beds out of reclaimed oak railway sleepers in 2011.   In the raised beds we grow fruit and vegetables, including apples, plums, peas, gooseberries, raspberries, peas and beans.  Flowering plants to attract bees and insects are grown amongst the vegetables.    There are also a potting shed and wooden compost bins.

​The back garden is composed of 'rooms', divided by shrub borders.  There are paved paths and a large patio with seating.  There is a large pergola which my husband built in 2015, which is becoming covered by many climbing plants, including clematis montana, virginia creeper, honeysuckle and wisteria.  He also built two large log stores, in 2010 and 2014.

We have a small area of woodland, with mature chestnut, sycamore and ash trees.  Our chickens have free run around this area.

Our garden is open to the public in June, as part of 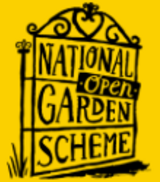